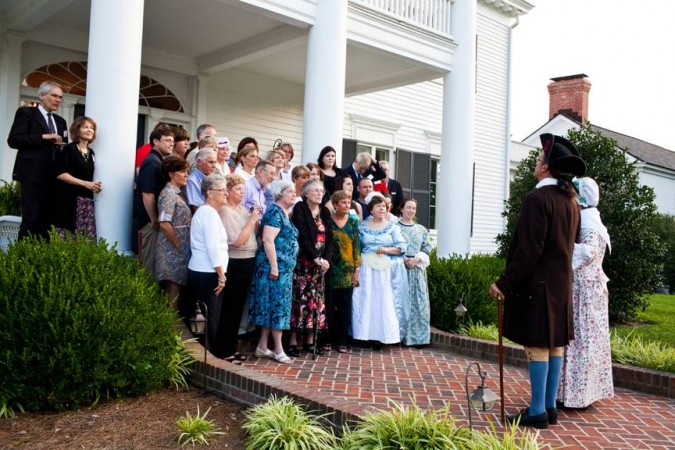 Warner, Lewis and Washington Descendants Celebrate the Legacy of Their Ancestors at Warner Hall

The manor house at the Inn at Warner Hall came alive with history Saturday, July 27.

Living history set the stage for the 1781 Colonial Dinner hosted by Col. Warner Lewis and his wife, Eleanor Bowles Gooch Lewis, interpreted in present day by Warren and Becky Deal of Gloucester.

Colonial music filled the drawing room. Ladies swished around in gowns and petticoats. The boots of Revolutionary War soldiers echoed across the hard, wood floors. And the smells from recipes inspired by “Dining With the Washingtons” overwhelmed the dining room.

The Inn at Warner Hall in Gloucester, Va. hosted an Ancestral Homecoming Weekend Friday, July 26 to Sunday, July 28 that brought together more than 50 descendants of the Warner, Lewis and Washington families to get to know each other, learn more about their heritage and the ways of life of their ancestors.

The history of Warner Hall is unique. There is no other spot in the world that can tie George Washington, the father of our country, Queen Elizabeth II, the current Queen of England, Robert E. Lee, of Civil War fame, and Meriwether Lewis, of Lewis and Clark. They all are direct descendants of the Warner and Lewis clans of Warner Hall.

Friday evening, Fairfield Foundation Archaeologists David Brown and Thane Harpole presented a program on 18th century life at Warner Hall and signed their book, “Warner Hall – Story of a Great Plantation.” The archeological finds – rare window lead dating to 1688, a wine bottle seal dating to the early 1700’s, belt buckles, stoneware and stemware, among other artifacts – from their digs around Warner Hall were on display throughout the weekend. Saturday, descendants followed in the footsteps of their Warner and Lewis ancestors who founded and expanded Warner Hall throughout the 17th and 18th centuries, in a private tour of Colonial Williamsburg.

To be able to trace your lineage, your family history, back hundreds of years is a special gift. We were delighted to orchestrate this family reunion and honored to watch our guests literally walk in the same footsteps as their ancestors.

A tour of the Purton Farm on the York, the home place of John Smith and Mary Warner Smith, and White Marsh Plantation – private house and grounds described by Gen. Robert E. Lee as the most beautiful place he’d ever seen –rounded out the afternoon before returning to Warner Hall for an 18th Century Dinner featuring costume, music and customs of the day.

The program Saturday evening featured special presentations, including the preservation efforts underway for the ancient John Lewis Family Cemetery in King and Queen County and “From the Beginning: Warner and Lewis Family English Origins,” by descendant and researcher, Richard Weaver.