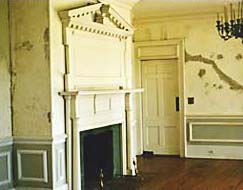 The restoration of Warner Hall, and its subsequent conversion to a country inn combined our enthusiasm for hospitality with our passion for historic preservation. The rehabilitation and adaptive re-use of the 19th century manor house at Warner Hall Plantation gave us a unique opportunity to preserve over three centuries of history while providing the public with access to one of Colonial Virginia’s most important historic plantation homes.

With the guidance of the Virginia Department of Historic resources and a team of architects, structural engineers and builders, we pursued the least invasive methods possible with emphasis on keeping the existing floor plan, walls and moldings intact.

Q. How many historic buildings have you helped restore?

A. A number in Lancaster and many other places in Virginia, including Edgemont, one of Thomas Jefferson’s homes in Charlottesville. I have been an architect now for more than twenty years and have always been fascinated by working with old buildings.

Q. What was your first impression of Warner Hall?

A. Warner Hall reminded me of a beautiful, peaceful English country house with its architecture … the solitude … the extensive grounds around the house.

Q. How long have you and your firm been involved in this restoration?

A. About eighteen months.

Q. How do you begin a restoration of an historic building?

A. My mind acts like a video camera. I imagine the building as it will be. This involves a little “imagineering” as they do in Walt Disney World. I see in my mind’s camera the building full of people, enjoying themselves. This helps me visualize how the building will ultimately look. And keeps me from being surprised when I walk into the newly restored structure.

Q. Many historic preservation groups require that the building be restored to its original form. Does this hinder you as an architect?

A. Not really. We have a high level of respect for the original architecture. However, it is true that not all structures, even though they may be a hundred years old, represent good architecture. Some of the later additions may not meet the high standards of the original concept.

Sometimes restoration means finding the right balance between preserving the old and using more pleasing architectural designs. For example, finding interior framing for a window that no longer exists may provide the restorers a reason to create that window again. We have been very fortunate here at Warner Hall because so much of what is here is first rate, including the original plaster moldings and the fine details on the railings.

Q. What is your vision of how the Inn at Warner Hall will look when the last workman has left?

A. It’s going to be a place I want to be. Warner Hall will have all the elements that appeal to me. An historic structure. Great people who are going to run it. I know that breakfast will be served properly. And I can wander through beautiful grounds by the river. An English-style country retreat where I can just kick back for a week or a weekend.

Q. Ron, what was your first impression of Warner Hall when the new owners, Theresa and Troy Stavens, asked you to supervise all of the reconstruction work for the new inn?

A. Ron: I first became involved in May of 1999. By then Roland MacPherson and his company and a team of workers had already done much of the preliminary structural work. It has been a great project – especially when I remember where we started and where we are now. It has required meticulous workmanship because we were all committed to preserving or restoring this 19th century mansion as close to the original as humanly possible, following the guidelines of the Virginia Department of Historic Preservation.

Q. How about you, Roland?

A. Roland: My company, MacPherson & Associates, had just recently completed another major restoration project – the Governor’s mansion in Richmond. But I was also excited when I walked through Warner Hall the first time. It is such a beautiful house – with so much history.

Q. What would you both say were your major challenges here?

A. Ron: There were several. But one that stands out in my mind is the restoration of the great white columns on the portico. The columns consist of 6×6 wooden posts circled by wooden stays. Many of these stays had deteriorated over the years.

Roland: We felt it was essential to restore these columns from a structural standpoint – they provide support for the porch beams, as well as for aesthetic reasons. They add such a graceful touch.

Ron: The key problem was getting the stays to fit together properly together and then form a smooth circle around the central core of each column.

Q. On a smaller scale, was it like the construction of the St. Louis Arch where the final piece has to fit exactly in place?

A. Ron: Yes, that’s true. We took a sample of one of the stays to a mill shop, and they replicated all of the stays to the same specifications of the original. They did an excellent job.

Roland: But there was no way of knowing for sure that all of the stays would form a perfect circle until they were actually glued together. But they all did, and we had those beautiful columns in place again. We’ve been fortunate in working with many people who are so meticulous and proud of their work.