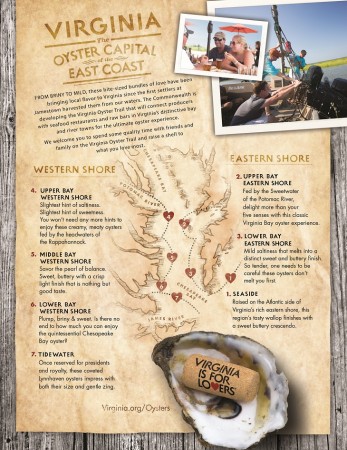 Virginia is For Oyster Lovers

Virginia is For Lovers. We’ve all heard it – the Virginia Tourism Corporation team does a great job! We’ve all seen it – bumper stickers, anyone? We all love it!

But as of this summer, Virginia got a whole lot tastier when Gov. Terry McAuliffe added a twist!

In celebration of the new “Virginia Oyster Trail” Virginia is also for Oyster Lovers.

The development of the Oyster Trail will “allow travelers to experience the state with taste by pairing the Virginia oyster with other quality products made in Virginia, including wine, craft beer, cider and spirits,” said Rita McClenny, President and CEO of Virginia Tourism Corporation, in a press release.

Virginia, deemed the “Oyster Capital of the East Coast,” has seven Chesapeake Bay oyster regions— regions that have been “producing bite-sized bundles of love and local flavor since the first settlers harvested them in Jamestown” over 400 years ago.

Here are some of the key reasons to love oysters:

Though oysters have been marketed in Virginia for centuries, they are still booming.

Dr. James Kirkely with the Virginia Institute of Marine Science (VIMS) told WAVY 10 the Chesapeake Bay oysters had $58.4 million worth of economic value in 2013.

“Watermen,” the men and women who make a living by fishing, crabbing and oystering on the Chesapeake Bay, are intertwined with the unique identity of the Bay and have molded its history, culture and economy. Virginia is the largest producer of fresh-wild catch and farm-raised oysters in the country thanks to those devoted watermen.

Historically, oysters were only eaten during the months whose names had an “R” because the quality was poor during the summer since the oysters had just finished spawning. Oysters are enjoyed year round now thanks to improved aqua culture techniques and disease-resistant oyster seed.

Oysters can be eaten raw, steamed, grilled and fried. And if you’ve been to Warner Hall for a feast in recent years, you’ve seen them as part of our menus. But beyond that, oysters vary in flavor based on the water in which they’re grown. Oysters grown in rivers with higher salinity, for example, will have a richer, saltier flavor. Thus, taking a trip along the entirely of the Virginia Oyster Trail will have you tasting oysters with a variety of flavors.

And don’t worry about counting calories with your oyster feasts. One-half pound of raw oysters only contain around 150 calories, and an abundance of iron.

Interested in making your way along the Virginia Oyster Trail? Why not make Warner Hall your central spot to stay? Visit our accommodations page here, find your room and book today! We have some favorite oyster eateries that we’d love to share with you!