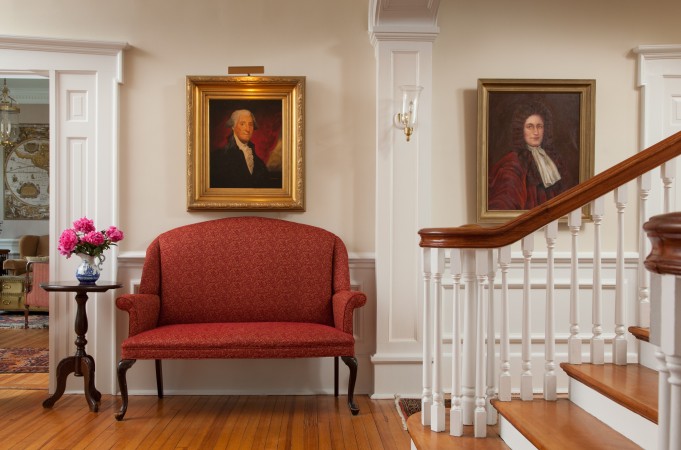 The Real George Washington: Interesting Facts About Our First President

What did you do this Presidents’ Day? Relax? Take a long weekend trip (like to your favorite Virginia country bed and breakfast)?

At some point, we hope you had the opportunity to reflect on the men – because they’ve all been men so far – that made the day possible.

Take George Washington, the president we think of most often around here at Warner Hall, which was the home of his great-great grandfather.

Washington was much more than America’s first president. Filled with passion, desire and ambition, Washington was a man who experienced great disappointment and great achievement.

But he was also just that – a man. He was a man that, while profiled in American history books and a pivotal part of this country’s foundation, was a husband, a brother and…a dancer.

That’s right. Our first president was known as an energetic and excellent dancer, showing off his skills at the growing number of balls, cotillions, parties and dances he was invited to. Many accounts claim he danced throughout the night with an array of female guests, and we like to think, and have heard, he learned to waltz right here on the Warner Hall estate.

Want some other interesting, lesser-known factoids about George Washington? Thanks to Mount Vernon, Washington’s beloved home, we have these tidbits to share.

–        He was considered by some to be quite the equestrian, developing his riding skills during the many foxhunts he participated in as a young man. He also trained his own horses, even while he served as President.

–        Even presidents enjoy a drink every once in a while. Of the tens of thousands of acres of land Washington owned in North America, he operated the largest distillery of the time at Mount Vernon. It produced nearly 11,000 gallons of whiskey. A reconstructed version of this distillery can be explored at there today. We didn’t see anything in historical data about his bartending skills. But we think he doesn’t have anything on Troy!

–        He took care of his teeth. And he wrote about it. Washington regularly suffered from dental issues, having recorded in his diary he paid five shillings to one doctor who removed one of his teeth. Payments to dentists and purchases of dental tools often show up in his communications throughout his life.

–        Washington eventually inherited Mt. Vernon after his elder half-brother passed away and the other intervening heirs had died. The original home he first inherited from his brother was much smaller than what you see when you visit Mount Vernon today. Washington designed and oversaw two large expansions to his mansion while also directing many landscape improvements to his land.

–        Mount Vernon was such a special place to Washington that his body lies at rest today at his beloved home instead of in a tomb beneath the U.S. Capitol, which was designed to be his final resting place. Washington stated in his will that he wished to be buried in the family vault in a new tomb constructed on his land.