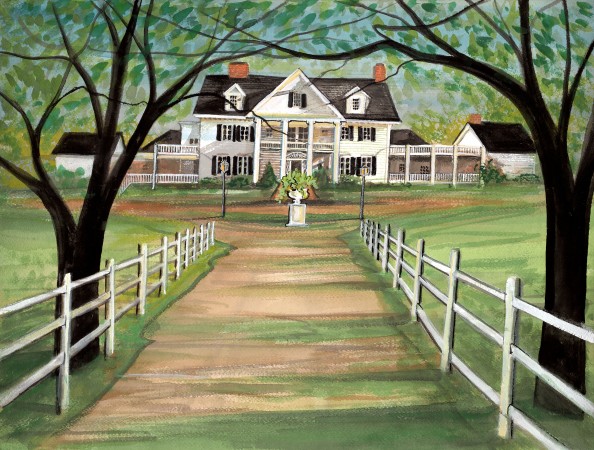 Prints of a painting of the Inn at Warner Hall by famed Virginia artist P. Buckley Moss is now for sale by innkeepers Theresa and Troy Stavens.

Moss, who has a studio in Mathews, finished her painting of The Inn at Warner Hall in March, according to her newsletter. In her newsletter, Moss recalled how she had once eaten lunch at Warner Hall with friends from Mathews. “I absolutely fell in love with it,” Moss said.

The Inn at Warner Hall has purchased 25 signed and numbered artist’s proof prints, numbers two through 26, to be sold at the retail price of $95. The prints are from among 250 and are a high-quality giclee on paper and signed by the artist.

Buckley Moss is considered one of the country’s foremost living artists. An alumna of Cooper Union for the Advancement of Science and Art in New York, the works of Moss are represented in more than 200 galleries worldwide.

As a subject for Moss’ talents, The Inn at Warner Hall is of renowned American historical eminence. The manor house at Warner Hall commands the headwaters of the Severn River in Gloucester County, site of the original 600-acre plantation site established in 1642 by Augustine Warner, whose famed descendants include George Washington, Robert E. Lee and Capt. Meriwether Lewis.

Warner received the acreage in exchange for bringing 12 settlers across the Atlantic Ocean to the Jamestown settlement in colonial Virginia. Washington was a frequent visitor to his grandfather’s plantation and today The Inn at Warner Hall is a restored, 11-bedroom mansion that’s one of the most historic and elegant inns on the East Coast.

The Inn at Warner Hall is a peaceful 38-acre Chesapeake Bay retreat, a delightful setting for weddings, family reunions and business conferences and the picture of country life and fine dining.

Moss works with a variety of media to include oils, acrylics, watercolor, mixed media, etchings and giclee. Her style is described as impressionistic and expressionistic, a combination of the complex and simple.

For Moss, her art “states in a forthright manner the ancient proposition of the triumph of beauty and truth over injustice,” she says in her biography. “I do not paint the dark side of contemporary existence, for I am dedicated to painting the hope of the future — hope that seeds positive thoughts of love, family and the beauty of the world. The directness of my own brand of abstract expressionism is deeply informed with a rich, cultural, mystical and religious symbolism that connects with people and lends my work its compositional strength.”