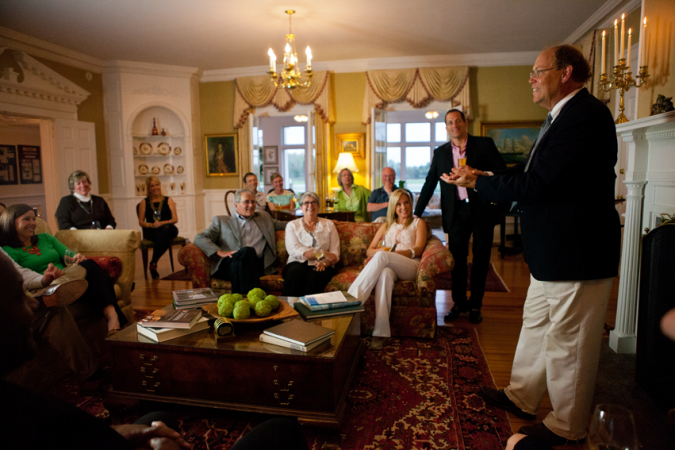 The Inn at Warner Hall in Three Sonnets

The history of Warner Hall is unique. There is no other spot in the world that can tie George Washington, the father of our country, Queen Elizabeth II, the current Queen of England, Robert E. Lee, of Civil War fame, and Meriwether Lewis, of Lewis and Clark.

They all are direct descendants of the Warner and Lewis clans of Warner Hall.

We know George Washington visited as a young boy, allegedly learning to waltz in the ball room, which we now call the parlor. He came here as General of the Revolutionary Army and during his first term as President. He spent New Year’s here. He brought his Secretary of State with him – they called him TJ, perhaps you know him as the father of the Declaration of Independence. Yes. That’s Thomas Jefferson.

We do know Robert E. Lee rode these grounds with old Traveler after the Civil War.

As is the more common day history. In the hallway just off the front door hangs a picture of Abe Lincoln. History tells us Abe Lincoln did the Gettysburg Address on the back of an envelope on a train to Gettysburg in 12 and a half minutes.

At my 40th birthday party, John Pleasants, a 1950 graduate of the U.S. Naval Academy, came up with this poem after three martinis on the back of a bar napkin in eight and a half minutes. So anytime he walks by Honest Abe he says, “I have you beat by four minutes.”

My history is old Norwegian, so it only took me eight months to memorize it. It’s three sonnets. It’s called Warner Hall and goes something like this.

In easternmost Virginia one can find a favored spot,

That time with all its ravages apparently forgot,

The echoes of Virginia’s past extend their haunting call,

And greet you from the entrances of stately Warner Hall.

There see the massive mansion with its drive-encircled lawn,

So ghostly in the moonlight, so glowing in the dawn!

And feel the soothing ambiance that welcomes one and all,

Which emanates forever from the bricks of Warner Hall!

And seen the treasures of this world as much as any man,

I’ve tasted pleasures here and there, but none that I recall,

Have soothed my southern spirit like the sight of Warner Hall!