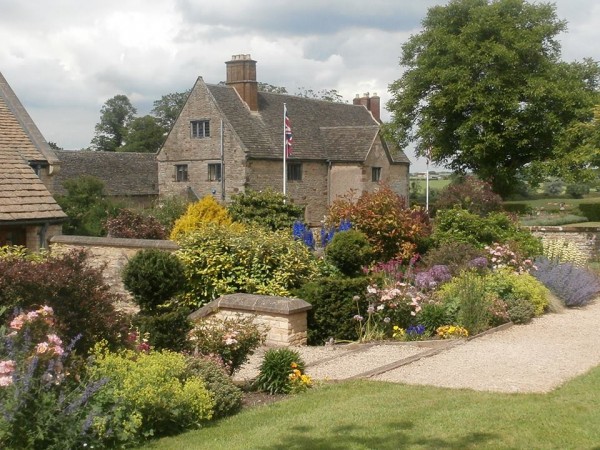 Sue McNally, the master gardener and estate manager of Sulgrave Manor, spoke to more than 30 people about the history of the manor and its connection with Warner Hall.

Sue McNally calls it the “Tudor house with American connections,” she told more than 30 Warner Hall guests May 6 during the first Dinner and Discussion event of the season. McNally is the Head Gardener of Sulgrave Manor.

Like Warner Hall, the Manor was built by George Washington’s ancestors. Lawrence Washington, the five times great grandfather of G. Washington, constructed the Manor in the mid-1500s, and even today, it stays true to its Tudor style, including its expertly kept garden.

As the head gardener of Sulgrave Manor for the last decade, McNally has tended to the grounds, which contain a rose garden of eight beds, an orchard with forty-two fruit trees, growing beds of herbs and a Tudor garden full of vegetables and plants that would have been grown in the sixteenth century.

The orchards, as McNally says, turn into a “sea of color” during bloom, and boast the beauty of daffodils, narcissi and delicate fritillary.

During McNally’s two week stay in America, she will be traveling throughout Virginia speaking on “Sulgrave Manor, Past and Present,” at historic spots, such as Monticello, Mount Vernon, Kenmore and Mary Washington.

The next Dinner and Discussion, called “The Magic of Mushrooms—Foraging for Your Favorite Fungus in the Wild” will be June 24. Limited seats are available for the gathering, which begins at 5:30 p.m., Steve Hass’ lecture and discussion at 6 p.m. and dinner at 7 p.m. The dinner, of course, will feature mushrooms.

Who was Lawrence Washington?

What was the initiative to purchase Sulgrave Manor?

It came from the Peace Centenary Committees, which was set up in 1911, to determine how to commemorate the centenary of the Treaty of Ghent, which established peace between Britain and the USA in 1814.

When was the house open to the public?

In 1921, the house was opened to the public by the Marquess of Cambridge and dedicated as “a centre from which sentiments of friendship and goodwill between the British and American peoples will forever radiate.”

What’s so impressive about the Tudor Garden?

There’s a replica forge that’s been built in the southwest corner and beside it, is a typical Tudor peasant’s garden full of the types of vegetables and plants that would have been grown in the sixteenth century.

What about the National Herb Society?

The Manor is also home to the growing beds of the National Herb Society. Here, there are domestic, culinary and medicinal herbs that would have been taken to America, and others that were introduced to England from America.