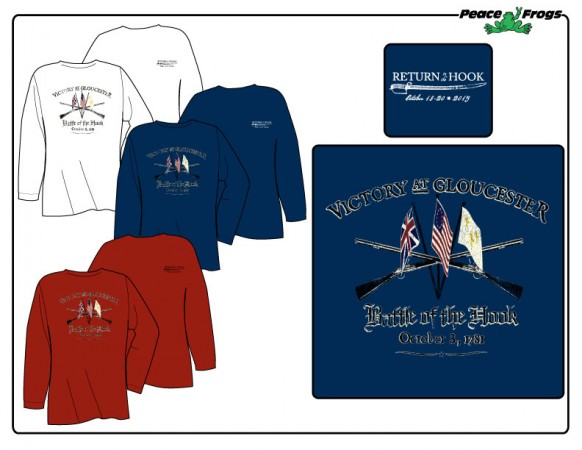 When the British, French and Americans Return to the Hook this month, spectators can greet them wearing limited edition commemorative t-shirts thanks to Peace Frogs, a Virginia-based casual apparel company who helped sponsor the Revolutionary War reenactment, which we are honored to host here, at the Inn at Warner Hall.

On October 19-20, 2013, the Allies will engage the British Legion and other Crown forces in a reenactment of the 1781 Battle of the Hook that took place in Gloucester County, helping win the Siege of Yorktown and America’s independence.

The sale of the t-shirts is part of the support needed to host the reenactment.

The short sleeve t-shirts are offered in white and navy.

The long sleeve t-shirts are offered in red and navy.

The reenactment will bring together more than 1,500 infantry, cavalry, artillery and maritime landing reenactors from across the country here, the home of President George Washington’s ancestors.

The remaining t-shirts, and other commemorative items, such as buttons, posters made from the winning entry in the Battle of the Hook art contest, Warner Hall Return to the Hook mugs and the Warner Hall book will be available at the event.

Volunteers are still needed Oct. 14 through Oct. 21 to help with, among other duties, reenactor registration, crowd control, battlefield preparation, camp layouts, docents at the Inn at Warner Hall, equipment distribution, brochure and schedule of events distribution, caring for horses and farm animals, event collector’s items sales and event clean up.