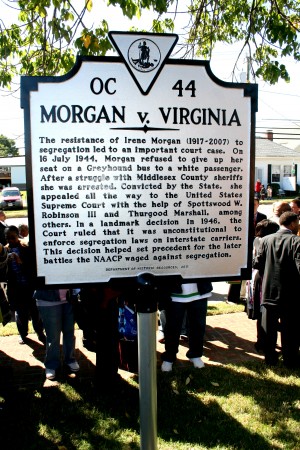 “The resistance of Irene Morgan (1917-2007) to segregation led to an important court case. On 16 July 1944, Morgan refused to give up her seat on a Greyhound bus to a white passenger. After a struggle with Middlesex County sheriffs, she was arrested. Convicted by the State, she appealed all the way to the United States Supreme Court with the help of Spottswood W. Robinson, III and Thurgood Marshall, among others. In a landmark decision in 1946, the Court ruled that it was unconstitutional to enforce segregation laws on interstate carriers. This decision helped set precedent for later battles the NAACP waged against segregation.”

Take the 20-minute drive from the Inn at Warner Hall and stop in front of Saluda’s historic courthouse and those are the powerful words you’ll read on a highway marker erected in Irene Morgan’s honor.

Revolutionary and brave women and men have long been the heartbeat of this region. Irene Morgan is no exception. But what she did was exceptional. If you have a chance when you are visiting the Virginia Middle Peninsula and Northern Neck near Warner Hall, or even if you are a local and haven’t learned more of her story, take the time here to read more about this strong-willed woman who 11 years before Rosa Parks refused to give up her seat on a bus.

According to the Maryland’s Women’s Hall of Fame, where she is a member, on that morning in July “Kirkaldy, recovering from a miscarriage, boarded a Greyhound bus in Gloucester, Va., to return to her home in Baltimore.”

“She selected a seat in a section of the back of the bus designated for black passengers. A half hour into the trip, a white couple boarded the crowded bus and the bus driver, under authority given to him by Jim Crow laws and segregation practices, demanded that Kirkaldy give up her seat.”

When she refused, the bus driver headed directly to the local jail in Middlesex. A sheriff’s deputy boarded the bus and handed Kirkaldy a warrant for her arrest, which she ripped up before kicking the deputy when he tried to grab her. She ended up in jail.

In court, she pleaded guilty to resisting arrest, but stood strong in her stance that she was not guilty to violating the Virginia segregation law. Her attorney “argued that the segregation law violated the interstate commerce clause of the U.S. Constitution.”

With the backing of the NAACP and Thurgood Marshall, the case came before the U.S. Supreme Court.

The landmark decision came on June 3, 1946 when the Justices agreed that “segregation violated the Constitution’s protection of interstate commerce. In response, a group of civil rights activists rode buses and trains across states in the South in 1947, named the Journey of Reconciliation.”

Eight years later, the Supreme Court ruled in Brown v. Board of Education that segregation violated the Equal Rights Protection Act. And then in 1955, Rosa Parks famously refused to give up her bus seat in Montgomery, Alabama.

Kirkaldy moved to Gloucester in later life and died in 2007 at the age of 90.

Her story, her spirit and the lessons of what is fair and right live on.

Photos courtesy of the Gloucester-Mathews Gazette-Journal.