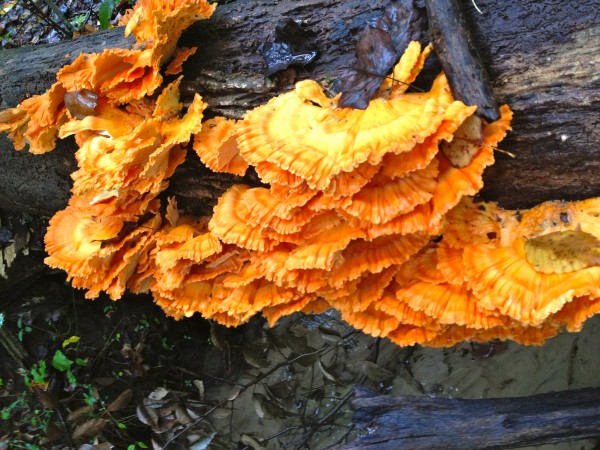 By Stephanie Heinatz, Friend of the Inn at Warner Hall

It couldn’t have been more than a couple of days after I shooed my 2-year-old son away from a wild mushroom growing in our front yard that Chef Eric Garcia from the Inn at Warner Hall asked if I’d be interested in going wild mushroom hunting.

“Sure,” I said, eager and excited about learning something new, but also wrought with parental hypocrisy. Here I was, having just told my son that wild mushrooms could make him super sick, and I was agreeing to traipse through some unknown woods to pick decomposing matter growing wild on dead trees.

Steve Haas, Virginia’s wild mushroom expert and owner of the Richmond-based Steve Haas Mushrooms, cultivates a wide variety of gourmet mushrooms in a chemical and pesticide free environment. He sells them at markets throughout the region and to fine restaurants all over the East Coast. In fact, that’s how Chef Eric met him. Chef Eric has used Steve’s very prized mushrooms for meals at Warner Hall.

Steve also believes strongly in education and showing people the beauty in mushrooms. That’s why, when he’s not growing his own, he leads people on mushroom forays.

Most people – at least those who don’t chastise their children for touching wild mushrooms – associate mushroom hunts with the western part of the country. But, as Steve says, Virginia is home to thousands of acres of “old growth hardwoods” that provide the hearty environment for the mushroom kingdom’s most prized varieties to grow.

The chilly, rainy, fall day Chef Eric and I met Steve at a wooded area in West Point couldn’t have been more perfect for mushroom hunting.

And Steve’s first lesson couldn’t have been more perfect for putting my mind at ease.

Most people were raised to be afraid of mushrooms, he said. While you should have a healthy respect for them, always obeying the golden mushroom hunting rule of “if you can’t identify it, don’t pick it,” the fungi foraged in the woods can provide some of the best eating.

Mushroom hunting, I quickly learned, is a peaceful, relaxing walk through the woods. During a three hour hunt – which could have been made shorter had I not locked my keys in my car before starting out – we made our way down trails, across creeks, over fallen trees and through piles and piles of leaves.

And we learned that the colors of mushrooms – oh, the colors! – can be as vibrant as flowers.

As Steve said, during this hunt with Chef Eric, we hit the mother load of mushroom hunt finds – nearly 40 pounds of bright orange, chicken of the woods (pictured above).

I brought a big hunk of the chicken of the woods mushroom home to cook up. But before it hit the hot butter, I handed it to my 2-year-old and told him all about mushroom hunting and Steve’s golden mushroom rule. He looked at, turned it over in his hands and ran his fingers all over the bright orange covering for no less than five minutes – an eternity in toddler time.

“There’s a phobia about mushrooms as the big unknown,” Steve told the Richmond Times-Dispatch recently. “But children are interested in them, so we can encourage them to look at the amazing colors, shapes and sizes while we teach them mushrooms’ place in nature.”