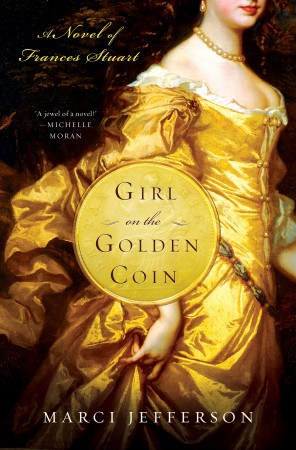 The Royal Stuarts. A famed seventeenth century mistress and the story of how she rejected three kings yet remained the face of England’s coins for decades.

That’s the story that will unravel during the Inn at Warner Hall’s premier event in its 2014 Dinner and Discussion series.

Warner Hall is pleased to announce that it will host Marci Jefferson, historical novelist and author of the newly released Girl on the Golden Coin, Wednesday, April 2 at 5:30 p.m. for a discussion, book signing and gourmet buffet dinner.

“When absolute Monarchs ruled from glittering seventeenth century courts, Frances Stuart captured the hearts of Louis the Fourteenth, Charles the Second and James the Second,” Jefferson wrote about her debut novel. “She rejected them all and graced England’s coins for generations as the model of Britannia, an enduring symbol of Britain’s independent spirit.”

Jefferson’s take on Frances Stuart has been billed as “what Phillippa Gregory did for the Tudors, Jefferson will do for the Stuarts.”

Marci brings it all together – she tells a great story, bringing to life one of history’s  most important families, and allows her readers to immerse themselves in a thrilling drama and never before told tale. The opportunity to keep learning and history alive is what we, and these events, are all about.

The Dinner and Discussion events are $55 per person and include dinner, complimentary wine and the featured speaker.

Seating is limited. Advanced reservations are required. Contact Warner Hall to reserve a seat at 800.331.2720 or info@warnerhall.com.

This event is open to the community and non-lodging guests.

The Inn’s 11 rooms are available the evening of this event. Guests should inquire about room availability when RSVPing for the Dinner and Discussion or by visiting the accommodations page.

Marci Jefferson grew up in an Air Force family and lived numerous places, including North Carolina, Georgia, and the Philippines. Her passion for history sparked while living in Yorktown, Va., where locals still share Revolutionary War tales. She lives in Indiana with her husband and children, but has family in Gloucester, Va. and has stayed multiple times as a guest at the Inn at Warner Hall. Girl on a Golden Coin is her first novel.