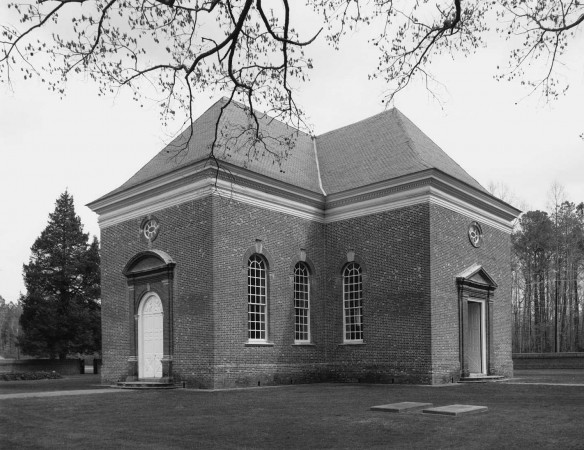 What do three signers of the Declaration of Independence, two U.S. presidents, eight Virginia governors, A Supreme Court chief justice and Robert E. Lee all have in common?

They are descendants of Robert “King” Carter, one of Colonial Virginia’s most prominent citizens—a member of the House of Burgesses, Speaker, Treasurer and acting Governor of Virginia and the man behind Christ Church.

Carter built Christ Church with money from his own pocket for his friends and community in Lancaster County, Va., and today it’s revered for its preservation and deep-rooted history.

After the Revolutionary War, Americans were free to worship anywhere because the Church of England was disestablished and the state had confiscated its property. However, because Christ Church was built with Carter’s personal funds on privately owned land, it was not seized and would continue to practice.

Unfortunately, Carter didn’t live long enough to see his church complete construction, dying three years before it was finished. However, after his death, his sons John, Charles and Landon oversaw the completion of his project.

When the church was completed in 1735, many found it remarkable for its thoughtful architecture and design. Fast-forward to 2015, and it stands mostly unchanged.

Its construction is one main reason that the church stands out to historians — it even avoided “demolition, alteration and modernization” that befell other colonial structures because of its history.

According to the Foundation for Historic Christ Church, the construction, history, serendipity and community resolve are all at play in making Christ Church such a historic spot.

But what is so special about the construction?

Christ Church’s brickwork, distinctive roof, compass-headed windows and monumental entablature revere it as one of the most important examples of Georgian architecture in America.

It’s considered one of the most sophisticated works produced in Colonial Virginia. Of all the churches built in the seventeenth and eighteenth centuries, the entire structure displays unparalleled craftsmanship.

The half million bricks used to build Christ Church were fired in at least three kilns near the churchyard, an important fact given that the church still stands today.

“From the early 19th century, determined Episcopalians, preservationists and concerned citizens undertook patch and mend repairs. In 1958, the Foundation for Historic Christ Church was formed and fully restored the church, earning designation as a National Landmark in 1961,” according to the Foundation.

The Foundation for Historic Christ Church is a non-profit organization dedicated to preservation, research and education.

If you find yourself wanting to visit the historic sites located near the Inn at Warner Hall during your next visit, venture to Christ Church, if only to marvel at it’s distinct history.

Worship services are held at 8 a.m. on Sunday’s from Memorial Day until Labor Day. The reception Center and museum are open April through November, 10 a.m. until 4 p.m. on Monday through Saturday. It’s also open 2 to 5 p.m. on Sundays.

Looking for other fun things to do while visiting Warner Hall?

Visit Urbanna, A Waterfront Village on the Northern Neck