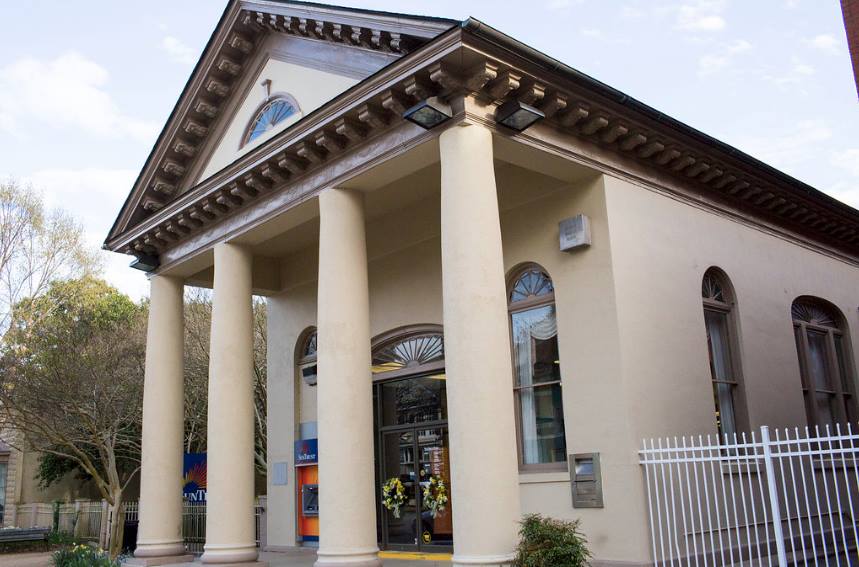 Restoring iconic buildings and breathing new life into them is, as you know, something that the Inn at Warner Hall greatly values. It’s our responsibility to preserve our past, and at the same time, grow into the future to build stronger communities.

That’s why Innkeeper Theresa Stavens is honored to serve on the Feasibility Oversight Committee for an exciting new opportunity happening now on Gloucester Main Street, a short drive from the Inn.

The best part? The community is invited to get involved.

The Gloucester Revolving Loan Fund announced last month that it purchased the iconic century-old bank building at 6548 Main Street and in partnership with the Gloucester Main Street Preservation Trust will launch a feasibility study on its revitalization. The study is being supported by a grant from Virginia Main Street.

The bank building, most recently in operation as a SunTrust bank and purchased by the Fund for $600,000, dates back more than 100 years. Including the basement and upstairs spaces, it measures in at 10,500 square feet.

“Engaging the community on this project is an important element of this study,” said Jenny Crittenden, Executive Director of the Trust. “That is the purpose of this visioning event.”

During the public visioning event, the community will have the opportunity to offer their ideas of how the bank building could be used in coming years.

“We will have several visioning boards that outline the history and possible uses of the property,” Crittenden said. “The community will have the opportunity to vote on what they think would be the best use of the building, from retail to restaurants, service businesses and residential.”

The main part of the building, which has always been in operation as a bank, was built in 1902 and became the Bank of Gloucester in 1906. SunTrust owned and operated the building for quite some time. Although they sold the building to a real estate investment trust in 2010, they still occupied it until 2017.

This purchase marks the first time in over a century that the building could be used for something new.

The Trust secured a $25,000 grant from Virginia Main Street, a preservation-based economic and community development program, and has budgeted an additional $10,000 to complete a feasibility study on the property.

While feasibility studies can all be a little different, the purpose of this study is to determine the highest and best use for the building.

The Trust, in partnership with the Fund, anticipates developing and sending out RFPs this fall to consultants who routinely handle feasibility studies of this magnitude, as well as to those who have a strong background in downtown development and are connected with resources and knowledge of other grants and tax incentives that can be accessed for the project.

The study itself will result in the identification of the most impactful uses, along with architectural conceptions, cost assessments, and business proformas.