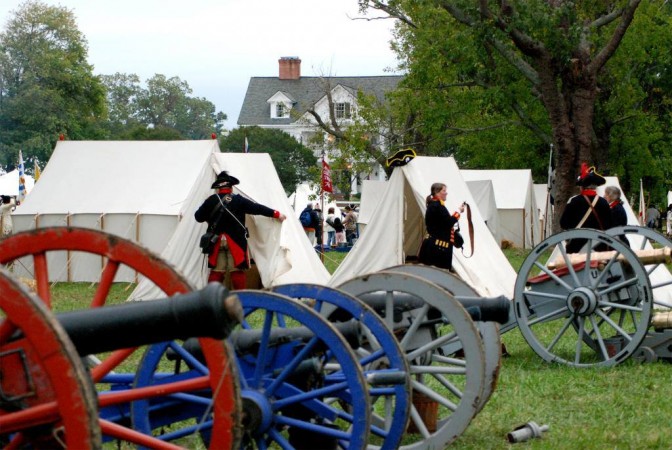 Calling all volunteers and Patriots! The British are coming back to the Inn at Warner Hall, with the Americans and French, too, and the Battle of the Hook Reenactment Committee needs an army of volunteers to help pull it off.

On October 19-20, 2013, the Allies will engage the British Legion and other Crown forces in a reenactment of the 1781 Battle of the Hook that took place in Gloucester County, helping win the Siege of Yorktown and America’s independence.

The reenactment will bring together more than 1,000 infantry, cavalry, artillery and maritime landing reenactors from across the country at the Inn at Warner Hall, home of President George Washington’s ancestors.

Volunteers are needed Oct. 14 through Oct. 21 to help with, among other duties, reenactor registration, crowd control, battlefield preparation, camp layouts, docents at the Inn at Warner Hall, equipment distribution, brochure and schedule of events distribution, caring for horses and farm animals, event collector’s items sales and event clean up.

“The Battle of the Hook reenactment is being financed entirely by donations, both in time and money,” said Rudy Heinatz, Volunteer Coordinator for the event. “Every little bit any person can contribute to helping will help pull this event together.”

ABOUT THE BATTLE OF THE HOOK:

The Battle of the Hook reenactment in Gloucester is being financed entirely by donations, including the educational programs.

The Inn at Warner Hall is located roughly three and a half miles from U.S. Route 17 and a 30-minute drive from Colonial Williamsburg. The battlefields of Yorktown are within 15 minutes and Jamestown, America’s first settlement, is a 50-minute drive along the scenic Colonial Parkway. The state capitol of Richmond, the Norfolk Harbor, and Virginia Beach are within an hour’s drive.

“This Revolutionary War reenactment celebrated General Washington’s victory over the British Army,” said Warren Deal, the Battle of the Hook planning committee’s chairman. “Historic battles will be brought to life by living historians. Recreated military units from across the country will encamp near the actual battlefields where the American Revolution was won after six long years of fighting.”