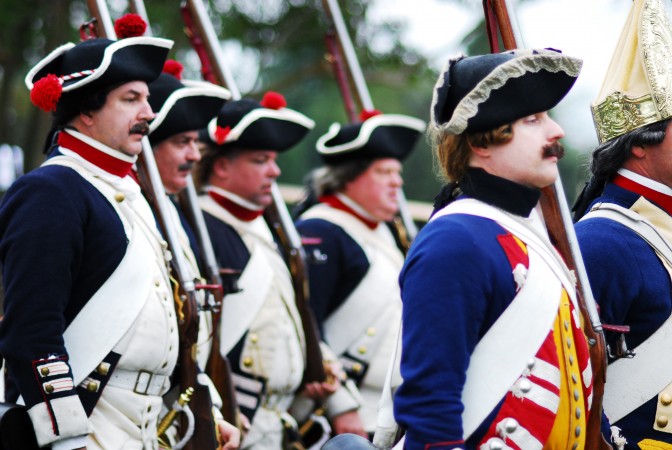 Calling all artists! The Cook Foundation Announces Battle of the Hook Art Competition!

Calling all artists! The Cook Foundation is pleased to announce it will sponsor a Battle of the Hook poster competition in commemoration of the 1781 Revolutionary War battle that will be reenacted in Gloucester, Va. Oct. 19 and 20 right here at the Inn at Warner Hall.

Submissions should depict the Tidewater, Virginia region from 1776 to 1781 and feature the themes of perseverance, endurance and courage.

The winning entry will receive a $500 prize.

The competition is open to ages 18 and up. The winning entry will become the property of the 7th Virginia Regiment, who will use the artwork to produce a commemorative poster.

The winning artist will also agree to sign a limited number of the reproductions and be available for advertising and promotions.

The $25 entry fee is tax deductible.

Completed applications must be postmarked by Aug. 15 and mailed to Gloucester Parks, Recreation & Tourism at 6467 Main Street, Gloucester, Va. 23061. Applications are available at www.battleofthehook.org.

The winning entry will be announced Sept. 4 and unveiled at the Inn at Warner Hall’s Battle of the Hook Patriot Dinner on Sept. 11.

ABOUT THE BATTLE OF THE HOOK

On October 19 and 20 a reenactment of the 1781 Battle of the Hook that took place in Gloucester County, helping win the Siege of Yorktown and America’s independence.

The reenactment, one of the largest recreations of a Revolutionary War battle, will bring together more than 1,000 infantry, cavalry, artillery and maritime landing reenactors from across the country at the Inn at Warner Hall, home of President George Washington’s ancestors.

“This Revolutionary War reenactment celebrated General Washington’s victory over the British Army,” said Warren Deal, the Battle of the Hook planning committee’s chairman. “Historic battles will be brought to life by living historians. Recreated military units from across the country will encamp near the actual battlefields where the American Revolution was won after six long years of fighting.”

This is the second Battle of the Hook reenactment. The first also took place here nearly five years ago.

The Inn at Warner Hall is located roughly three and a half miles from U.S. Route 17 and a 30-minute drive from Colonial Williamsburg. The battlefields of Yorktown are within 15 minutes and Jamestown, America’s first settlement, is a 50-minute drive along the scenic Colonial Parkway. The state capitol of Richmond, the Norfolk Harbor, and Virginia Beach are within an hour’s drive.

ABOUT THE COOK FOUNDATION

For more information about the Cook Foundation, visit www.cookfoundation.info.