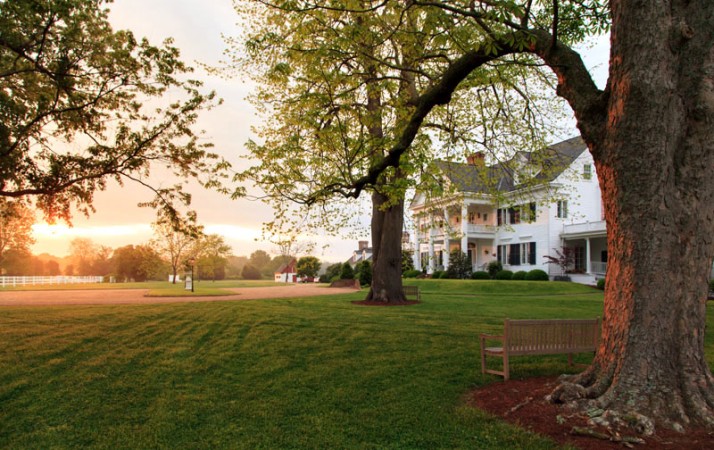 In the winter of 1642, Augustine Warner I arrived in Jamestown with twelve new settlers for the Virginia Colonies. For bringing these colonists to the new frontier, Warner was given a “head Grant” of 600 acres in Gloucester, Virginia. He eventually expanded his acreage at his new plantation, WARNER HALL, to several thousand acres prior to his death in 1674.

During his life he was Justice of York, Justice of Gloucester, and a member of the King’s Council in Virginia.  Augustine Warner was the great, great grandfather of George Washington, and an ancestor of Robert E. Lee. Queen Elizabeth II is a direct descendant of Augustine Warner I through the Bowes-Lyon family and the Earl of Strathmore. Warner Hall is referred to as the home of the Queen’s American ancestors.

In 1676, Nathaniel Bacon came to Gloucester after burning Jamestown and made Warner Hall his headquarters.  It was at Warner Hall that Bacon invited the “Oath of Fidelity” of his fellow countrymen.

All of Augustine Warner II ‘s sons died young and when Augustine himself died in 1681 at the age of 39, he left three daughters, Mary, Mildred and Elizabeth. Mary went on to marry John Smith, of Purton, on the York, and their son, Augustine Smith was said to have been one of the Knights of the Golden Horseshoe who accompanied Governor Spotswood on his famous expedition across the Blue Ridge Mountains in 1716.

Mildred Warner married Lawrence Washington and their son, Augustine, married Mary Ball. Augustine and Mary became the proud parents of George Washington, who was named after his great-grandfather, George Reade, founder of Yorktown. Perhaps the most recognized patriot in American history, General George Washington led the Colonies to independence from the British in the Revolution of 1776.  General George Washington continued his role as a great patriot in 1789 and become the first President of the United States of America. In a famous funeral phrase, Henry Lee declared that Washington was “first in war, first in peace, and first in the hearts of his countrymen.”

Elizabeth, the third daughter of Augustine Warner II, became the wife of John Lewis and inherited Warner Hall.  Their son, John Lewis II (1702-1754) was a member of His Majesty’s Council, and was prominent in Gloucester County. The Lewis Family occupied Warner Hall for generations and members of the family immigrated to all parts of the United States. Lewis family descendants built a number of important Virginia homes including Belle Farm, Eagle Point, Abingdon and Severn Hall. Colonel Fielding Lewis of Belle Farm, was the grandson of Elizabeth and John Lewis.  Col. Lewis was married twice, first to Catherine Washington, and after her death, to Elizabeth (Betty) Washington, sister of George. One of Fredericksburg’s most beautiful and historic homes, Kenmore, was built by Fielding Lewis for his wife Betty.

As the Warner – Lewis family grew over the years so did the size of the house. From the time of Augustine Warner II, to his daughter Elizabeth and her husband John Lewis, the family and plantation prospered.  Warner Hall came to consist of a large center structure with two separate detached brick dependencies. The east building was the plantation kitchen and laundry, and the west building was the tutor’s quarters, plantation schoolroom and shipping office.

In 1740, a fire destroyed the original 17th century Warner home, but the Lewis family rebuilt their residence on the same foundations. The property remained in the Lewis family until the 1830’s. In 1849, the center section of the original Lewis house suffered a devastating fire, leaving the two brick east and west dependencies and out buildings. Before the turn of the century, the Cheney family acquired the property and built the present wood-framed Colonial Revival mansion that was popular in that era, on the original foundation and of the same floor plan as the Lewis house.

Listed by both the National Register of Historic Places and the Virginia Historic Landmarks Commission, The Inn at Warner Hall continues to be of major architectural and genealogical significance in American history. Warner Hall has long been considered one of the premier properties in the Virginia Tidewater area. The property is located 3 ½ miles from U.S. Route 17, and Colonial Williamsburg and the Hampton Roads area are just 30 minutes away. The State capital of Richmond and the Norfolk Harbor are approximately a one hour drive.